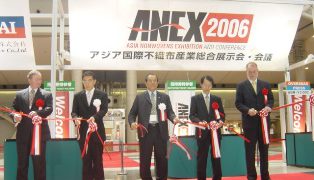 The Asia Nonwovens Exhibition and Conference (ANEX) will be held from June 6th to 8th, 2018 at Tokyo Big Sight in Tokyo, Japan.

As one of the three largest exhibitions for nonwovens in the world together with IDEA in the U.S. and INDEX in Europe, ANEX will be held in Japan for the first time in 12 years, and is being organized jointly by the Asian Nonwoven Fabrics Association (ANFA) and All Nippon Nonwovens Association (ANNA).

In regard to holding ANEX 2018 in Japan, ANNA Chairperson Yoshio Oishi (President of Dynic Corporation), says, “ANEX 2018 will be a very good opportunity to disseminate Japan’s high technology to the world.”

Hiroaki Kanai, Chairperson of the ANEX 2018 Executive Committee and President of Kanai Juyo Kogyo Co., Ltd., also says, “ANEX is an international exhibition for nonwovens both in name and substance, and we hope to make it a success and increase the presence of nonwovens.”

Japanese nonwovens have changed significantly since ANEX was last held in Japan in 2006. According to the Japanese Ministry of Economy, Trade and Industry (METI), Japanese production of nonwoven fabrics amounted to approximately 330,000 tons in 2006. Production was at about 340,000 tons in 2016, and remained almost the same in 2017.

Meanwhile, Japan’s textile production continued to decrease at sharp rates with the production of man-made fibers decreasing by 25% from about 1.2 million tons in 2006 to about 900,000 tons in 2016, along with the production of cotton yarn by 60% from about 80,000 tons to about 30,000 tons, and that of wool yarn by 40% from 15,000 tons to 9,000 tons. Although the nonwovens’ increase from 2006 was only 3%, nonwovens were the only textile category in which production increased in Japan. Nonwovens are mainly made from polyester, polypropylene and commodity synthetic fibers, and are not high-performance fibers such as carbon fibers and aramid fibers, but their production is increasing.

ANEX 2018 will be one great show for Japanese personalized functional nonwovens. Original plans were to use two halls of Tokyo Big Sight, but the halls were increased to three. Nevertheless, the show is fully booked. ANEX 2018 Executive Committee Chairperson Kanai referred to the strong response, saying, “It appears that the winds are blowing in favor of nonwovens.”

According to a METI report on the current situation and challenges for the textile industry, nonwovens are cited as one of the textile products supporting the growth of man-made fiber companies. This indicates that nonwovens are more than ever regarded as an important material in Japan.

Under such circumstances, ANEX 2018 will be held. ANEX 2018 is also an international exhibition with overseas exhibitors accounting for more than 60%, and visitors will have an opportunity to see the latest in nonwovens, which are a growing industry not only in Japan but also around the world.