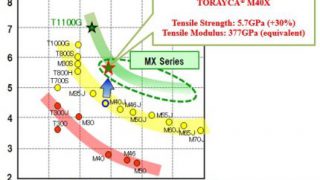 The company will also introduce prepregs (high-performance resin-impregnated fabrics) using the MX series carbon fibers for a variety of applications.

In the development of the Torayca MX series, Toray further pursued both fiber strength and tensile modulus, which are in a trade-off relationship, to the utmost limit and applied technology to improve the orientation by closely controlling the graphite crystal structure in a nano order. It succeeded in improving the tensile strength of M40X, the first variety of Torayca MX series, by about 30% while retaining the equivalent tensile modulus to conventional carbon fibers.

Toray will introduce prepregs with the Torayca MX series carbon fibers. The tensile strength, compressive strength and shock resistance of Torayca MX series prepreg, for which Toray’s proprietary nano technology Nanoalloy technology has been used in the matrix resin, have been significantly improved as compared with conventional products. It could contribute to weight reduction of composite parts, as it allows ideal stiffness design while retaining strength.

Toray will expand the product lineup in the series in response to market needs, as well as applications to those requiring high tensile strength and compression strength. 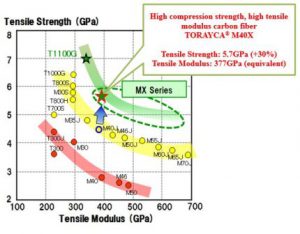