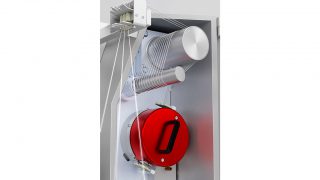 Major technological changes to Oerlikon Neumag’s RoTac³ tangling unit produce even more efficient BCF yarn tangling. On the one hand, the tangling nozzle has been flow-optimized, allowing the air pressure to be reduced by approximately 10% compared to its predecessor, while maintaining the same knot strength. Furthermore, the nozzle bearing arrangements have been improved. Consequently, either higher speeds or nozzle rings with greater numbers of holes can be used, generating more knots in the yarn.
Even at high production speeds, tangling knots can be set considerably more evenly with the RoTac³ than in the case of other conventional tangling units. Frequent tangling dropouts are now a thing of the past. This ensures better yarn quality, and has a positive impact on further processing. The result: the carpet has a visibly more even appearance.
Stable and efficient yarn production is hugely important to yarn manufacturers. Not only does the evenness of the tangling knots make the investment interesting, so too does the energy efficiency of the RoTac3. The tangling unit requires up to 50% less energy for generating compressed air. Against the background of rising energy prices, this represents an excellent prerequisite for optimizing production costs.
Oerlikon Neumag has been able to secure various retrofit contracts since the launch of RoTac3 in 2015. And new systems are predominantly equipped with RoTac³, which is included in the standard scope of delivery for the newer BCF S8 system. The tangling unit is available as an option both for the single-end Sytec One system and the three-end S+, and it can also be retrofitted on request.