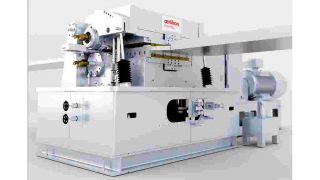 Technological changes to Oerlikon Neumag’s Baltic crimper thrust pad contacting device have resulted in considerably reduced friction in the crimper rolls and hence less wear and fewer metal particles contaminating the crimped staple fibers.
Thrust pads close the gap between the crimper rolls on either side. Normally, these thrust pads are continually pressed – under high pressure – against the sides of the crimper rolls. Wear and metal debris on the thrust pads is the result of this constant contact. The metal debris can contaminate the fibers, something that is particularly undesirable in hygiene applications.
With the new system, the thrust pads are pressed against the rolls with less pressure and then fixed into place. This prevents fibers from being caught, and the frictional force between the pressure disk thrust pad and the crimper roll is minimized. Pilot applications have demonstrated that metal debris from the pressure disks thrust pads is dramatically reduced, making them between three and seven times more durable.
The new thrust pad contacting device is now available.