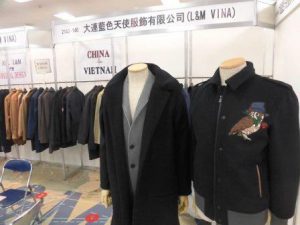 AFF Tokyo 2016 opened its doors on September 28th at Sunshine City in Tokyo. The fair will be held until September 30th.

The country-wise breakdown of exhibitors is 404 companies from China, nine from Cambodia, six from Myanmar, five from Bangladesh, two from Japan, and one each from Pakistan and Vietnam. Although it is the third year since the organizers began extensively inviting companies to participate in the fair throughout the Asian region, Chinese companies account for most of the exhibitors with a 96% share.

Compared to the previous Tokyo Fair, this year’s fair is larger with 20 more exhibitors and 18 more booths. According to the organizers, the economic slowdown in China is a factor increasing exhibitors. As a result of a decrease in orders caused by the economic slowdown, Chinese companies are moving to obtain more orders from Japan by exhibiting in this fair.

However, the Japanese market is also in a stagnant condition. In order to obtain orders under such circumstances, new approaches will have to be made with specialty techniques that include differentiation factors such as in costs, Quick Response and planning capabilities.