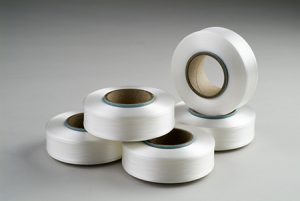 The Fibers & Textiles SBU of Asahi Kasei Corp. has developed Roica EF as the world’s first recycled elastic polyurethane filament (spandex) product, as well as an environment-friendly spandex product featuring low oil content.
Roica EF is made by recycling waste fiber generated in the manufacturing process, and is the world’s only spandex certified under the Global Recycle Standard (GRS).
In July 2015, German subsidiary Asahi Kasei Spandex Europe GmbH (AKSE) began supplying Roica EF made from 50% recycled material to well-known European apparel manufacturers that are at the forefront of adoption of environmental materials.
Asahi Kasei has also received GRS certification for Roica EF made from over 50% recycled material at the Roica Plant in its Moriyama Works in Shiga, Japan. Sales of Roica EF in Japan are scheduled to begin from May 1st, with wide range of applications including innerwear, sportswear, and outerwear expected.
AKSE has also developed Dorlastan V550 as an environment-friendly spandex product featuring low oil content of 1-3% compared to the conventional 5-6%. This reduces environmental burden in the manufacturing process in many ways, including by significantly reducing the amount of water used for scouring, the amount of scouring agent used, and the amount of electricity used. Dorlastan V550 has been sold in Europe since July 2015.