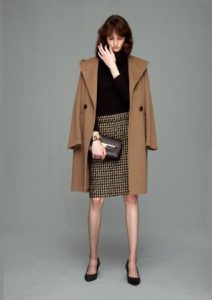 Sales of autumn apparel were slow, but the situation changed from the second half of October to the beginning of November, according to Hiroshi Ohnishi, President and CEO of Isetan Mitsukoshi Holdings Ltd.

With the drop in temperature, jackets began to sell, and coats are moving with the arrival of the cold winter season in November. Coat sales usually reach their peak in the middle of November. Sales of cold weather garments were slow last year, and this year retailers hope to cover the decrease caused by stagnant sales of autumn items with winter garments.

An official responsible for the Nijyusanku label at Onward Kashiyama Co., Ltd. said that coats started to move from the end of October, and such a move has never been seen before. Apart from angora and beaver hooded coats, lightweight down wear is also moving. This reflects the movement of shoppers who did not buy any fall garments. Jiyuku label coat sales have also risen by 40% in November compared to the previous year, and the sales down wear are strong.

Renown’s Aquascutum women’s wear brand reported that coats started moving around late October. The situation was 80-90% until then, but sales of trench coats turned to an increase in October. Synthetics occupied the mainstay, but down and wool items were also purchased, and sales in November are growing at double-digit rates.

Even for men’s coats, an official at Sanyo Shokai Ltd. said that the first sign of winter began to be seen in November, and with this, sales of winter items such as coats, blousons, knitwear and mufflers have been strong.