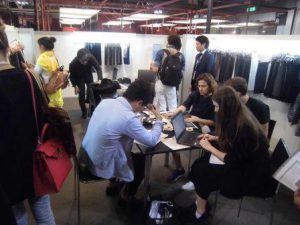 Japanese textile trading firms are attaching greater importance to growth strategies catering to international demand. This is even more prominent among trading firms that hold a large share in the domestic fabric market. The domestic market is inevitably shrinking due to a decreasing birthrate and aging population, and factors cannot be found that would dramatically increase the consumption of apparel and other textile products in the future. Accordingly, Japanese companies have to find ways to expand their exports.

A large number of Japanese textile trading firms are now exhibiting in exhibitions such as Première Vision and Milano Unica. There is no doubt that their participation in such exhibitions is a major factor boosting their overseas business. Their willingness to expand overseas business has not declined at all this year regardless of the appreciation of the Japanese currency.

Takisada-Nagoya Co., Ltd. has expanded its export business from zero to a scale of 2.5 billion yen in ten years. Although its exports business is expected to mark its first decrease in the current fiscal year, the company has a target to achieve exports of 5 billion yen in three years, and also has plans to achieve 10 billion yen including businesses in apparel and other finished products.

Stylem is also enjoying continuously favorable exports. Especially, its exports to China are growing at a remarkable rate, and exports to China by way of its Shanghai company during the first half of the current fiscal year (February-July 2016) sharply grew by 40% year-on-year. Exports to Europe and U.S. are also growing with the use of bases in these markets.

Uni Textile Co., Ltd. increased its domestic sales by 2% during the fiscal year ending in August 2016, while its exports climbed 15%. In addition to endeavors for invigorating exports to China, the company intends to accelerate exports by strengthening presentations mainly at exhibitions from a global point of view.