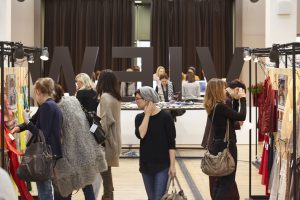 Japanese textile manufacturers in production districts and fabric trading firms are beginning to take a serious attitude toward expanding fabric exports again. This can be seen in the fact that many Japanese companies are exhibiting in the textile exhibitions which Premiere Vision and Milano Unica have newly organized for July in response to industry’s needs for earlier holdings.

European textile exhibitions have mainly been held in February for the spring/summer season, and in September for the fall/winter season. The three major exhibitions of Premiere Vision Fabrics, Milano Unica and Munich Fabric Start have been held in this schedule. However, business negotiations with major brands are already over by these dates, so the needs for an earlier holding have been growing among both exhibitors and visitors to these exhibitions.

Responding to such moves toward an early holding of European exhibitions, Japanese companies are moving to hold business negotiations about two months earlier than usual for concluding actual contracts. Japanese companies exhibiting in Blossom Premiere Vision, Prima MU and View Premium Selection this July are as follows: