According to revised production statistics released from the Japanese Ministry of Economy, Trade and Industry, the nation’s production of disposable diapers in April 2020 increased by 4.9% in weight over the same month of last year to 77,638 tons. In quantity, production rose 4.5% to 2,062.1 million diapers.

Production has been increasing from the comparatively low levels in the year before.

As a result of a low birthrate and aging population, the production of disposable diapers for adults continues to grow. 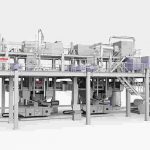