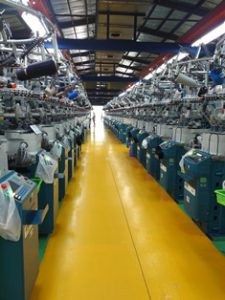 Especially, Asian sock manufacturers are installing these models in large numbers. Tatsuya Nagata, President of Union Industry Co., Ltd., Lonati’s agent for a number of East and Southeast Asian countries, says, “The situation has changed completely in the last one year with the Lonati machines equipped with the SbyS linking device being introduced rapidly.”

Lonati sock knitting machines equipped with the SbyS linking device have been introduced in industrialized countries where conventional hand linking has become difficult due to labor shortages and soaring labor costs. In recent years, emerging countries also suffering from labor shortages and rising labor costs have also been introducing these models, and the rate of installation has been accelerating. This year, sales have been increasing in the U.S., China and Turkey regardless of labor costs.

Especially in the Asian region, these models are rapidly being installed in China, Thailand, Vietnam, Indonesia, the Philippines, Taiwan, Korea and Mongolia. In these countries and regions, many sock manufacturers had been purchasing cheap sock knitting machines produced in Taiwan, Korea and China, but they are now moving to replace these machines with Lonati machines equipped with SbyS in large numbers. For instance, a sock manufacturer in Vietnam has introduced these Lonati machines in the hundreds.

This move is also significant in Korea. Korean sock manufacturers had formerly been installing mostly Korean sock knitting machines, but Union Industry set up a local subsidiary this July, and started full-scale presentation of Lonati sock knitting machines, which had a great impact in the Korean socks industry. The recent private show held in Korea attracted more visitors than expected, and there are signs that these machines are likely to come into widespread use in Korea as business negotiations are progressing.

The introduction of SbyS equipped machines is advancing even in Japan. According to Union Industry, about forty large-to-small-sized companies have already introduced these machines, and the majority of them are placing orders for more machines, as they are highly appreciated for their stability, high productivity and ability to exhibit strength in new developments.

In addition to the labor shortages and rapidly rising labor costs that have been the factors for the widespread use of SbyS equipped machines, socks manufacturers in emerging countries are promoting the production of high value-added items. In response to this move, socks makers in developed countries are also utilizing these machines more than before. There is a possibility that automatic toe linking might become a global standard in the socks industry.