Apparel sales at Japanese department stores and chain stores decreased in November compared to the year before.

Sales of knitwear and light garments such as cut and sewn items were favorable, whereas those of winter garments including coats along with mufflers, gloves and other articles for the cold winter were slow. Supported by vigorous consumption inside and outside the country, sales of sundries and miscellaneous articles continued to sell well, increasing by 5.4% and 4.2% to 100,171 million yen and 65,256 million yen respectively.

According to the Japan Chain Stores Association (58 firms, 10,387 stores), same-store apparel sales in November fell 12.0% from the year before to 85,205 million yen due to warm weather. Sales of women’s wear dropped 12.5% to 23,579 million yen, along with those of men’s wear by13.4% to 17,974 million yen and other types of garments and accessories by 11.0% to 43,652 million yen. In men’s wear, sales of sweatwear and casual pants sold well, while those of down jackets and coats were dull. Women’s wear sales were favorable for items such as formal wear and suits, but slow for jackets, coats and knitwear. 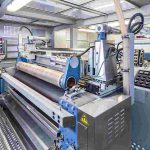