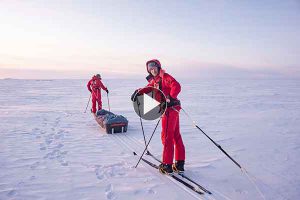 The Woolmark Company has joined Adidas Terrex, Gore-Tex and Byborre as an official partner of the Dark Ice Project, creating a technical kit for three explorers to wear on an unassisted expedition to the North Pole.
The Woolmark Company was announced as an official technical partner for the Dark Ice Project – an ambitious expedition strategized by three of Britain’s most accomplished polar explorers: Alex Hibbert, George Bullard and James Wheeldon.
More is known about the surface of the moon than the Arctic Ocean in winter, yet it provides a key barometer to the health of our planet. This first-ever winter expedition is about exploring new territory and making new discoveries in environmental science. The ground-breaking research will uncover how microplastics behave in the water, snow and ice of the dark Arctic depths. The three explorers will embark on an unassisted six-month journey starting later this year, aiming to get to the geographical North Pole as the sun begins to rise in March 2021.
The Dark Ice Project draws on the expertise of the above-mentioned technical performance leaders to design and create a kit to meet the athletes’ physiological and environmental needs. The explorers will set off by boat for the first phase, followed by a ski phase of up to 70 days, usually trekking for eight-to-ten hours each day, in extreme cold reaching minus 40°C and hurricane-force winds. Specific requirements for the garments, such as wind and water resistance, durability, breathability, moisture management and maintaining thermal comfort will be key to the explorers’ success.
Merino wool is the original performance fiber and its technical benefits coupled with its eco-credentials – it is 100% natural, renewable and biodegradable – make it the fiber of choice for the explorers’ kit.
The Woolmark Company and textile innovation studio Byborre developed a wool-rich base and mid-layer system from technical Merino yarns from the Südwolle Group, providing next-to-skin comfort, superior breathability and enhanced protection from the elements. By utilizing innovative Merino wool yarns and fabrics, the explorers are able to dress lighter, without losing protective benefits such as warmth.
Adidas Terrex developed the outerwear in collaboration with Byborre, supported by The Woolmark Company and Gore-Tex. The outerwear includes weather protection technology from Gore-Tex, along with a wool fleece lining in the trousers and jackets for enhanced thermoregulation, to be worn during the ski phase of the expedition.
The kit has currently undergone lab testing as well as two rounds of extreme wear testing to ensure ultimate performance; the first being a series of high-tech environmental chamber tests and the second during a one-month pre-expedition trip in northern Canada. The wool single jersey base-layer developed has successfully outperformed the single jersey base-layer previously worn by the explorers, securing a reduction in total weight of 18%, an increase in thermal resistance of 26%, a 3% increase in breathability and the dry time and drying rate improved by 28% and 61% respectively. The base and mid-layer fabrics have also undergone Woolmark quality assurance testing.
The kit in its current development phase is on display at The Woolmark Company’s stand at ISPO, Hall A2, Stand 326. Subjective feedback provided by the explorers based on their experience will be used to make any necessary changes to the final kit.