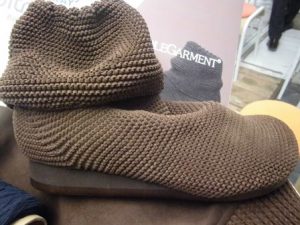 The Women’s & Men’s Wear Fabrics Department extensively promoted “senbism”, an overseas fabric brand that was introduced a year ago. Approximately 120 fabric items were exhibited in four categories, and the company also focused on presenting a fine-crimped ultra-micro polyester fabric that was introduced last December. According to a Toray official, sales of this new fabric started simultaneously inside and outside Japan, and orders have already been received for mass production. Even at Première Vision Fabrics, the response has been very good.

The Ultrasuede Department exhibited in Première Vision Fabrics for the tenth time. At the beginning, it was hardly known in Europe, but by continuing its participation in the exhibition, its fabrics have gradually come to be known, and today numerous buyers specify its use. Every season, buyers visit in search of new items. At Première Vision Fabrics, shoes made by knitting Ultrasuede slit yarn on a Shima Seiki WholeGarment knitting machine caught the attention of many buyers.