Kasen Nozzle
(Hall 2, Booth A12)
Contributing to the Differentiation of Chinese Producers With Conjugate Spinnerets, Etc. 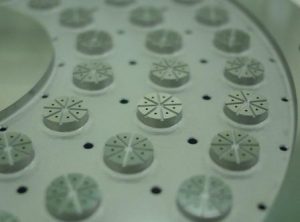 Conjugate spinnerets are the main products for the Chinese market

Kasen Nozzle Mfg. Co. Ltd. will undertake corporate public relations activities with panel displays at ITMA ASIA+CITME 2016 as a leading manufacturer of spinnerets. According to Kazuya Togawa, President of Kasen Nozzle, China is an important market accounting for about 40% of its sales. Synthetic fiber producers and nonwovens manufacturers in China have begun a change from commodity to sophisticated products. The company is to comply with this change with a wide line of spinnerets made with its high precision processing technology, such as spinnerets for producing conjugate fibers and those that will help Chinese producers differentiate their production.
The company’s strength is in its high-quality stable supply system from designing to manufacturing. Kasen Nozzle spinnerets boast a high share in the Chinese market, because Chinese companies appreciate its strength, and their reliance on its products is high. This can be seen from the fact that the majority of spinneret sales in China is to local producers. Together with catering to demands in China with a liaison office in Shanghai, the company provides fine technical support with technicians dispatched from Japan.
Particularly, conjugate spinnerets are unique products from Kasen Nozzle. Its lineup includes various conjugate spinnerets, such as island-in-the-seas, segmented-pie and sheath-core types, which the company produces from the design stage. President Togawa says, “The spinnerets we sell to China are mainly conjugate spinnerets and not the commodity types. The Chinese synthetic fiber industry is in oversupply due to large-scale capacity expansions centering on polyester fiber. However, our products are mainly differentiated items such as conjugate spinnerets, so the impact from oversupply is slight.”
China will probably remain its most important market in the future as well, and the company considers that Chinese synthetic fiber producers and nonwoven manufacturers are likely to become more mature and head toward producing differentiated items in pursuit of higher quality. In response to such moves, the company can easily exhibit its capability of developing high technology, and hopes to link this to the development of new fibers and yarns with Chinese companies.
At ITMA ASIA+CITME 2016, Kasen Nozzle will have a joint booth with Sojitz Corporation, and the textile machinery of other companies that Sojitz sells will also be displayed on panels.