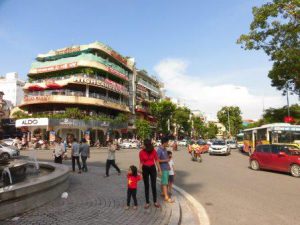 In regard to making it possible to procure fabrics and other material locally in Vietnam, the Vietnamese textile and apparel industries and Japanese companies utilizing the country as an apparel manufacturing base agree in the same direction. However, there is a slight difference in contents. Vietnam positions the development of the textile industry as an essential task for expanding exports of textile goods to global markets, whereas Japanese companies currently consider it for strengthening competitiveness in business for exporting apparel to the Japanese market. This difference is linked to the issue of how to take advantage of Vietnamese production.

This year, Vietnam’s apparel exports are growing at a significantly slower rate, an unusual movement that has never occurred before. According to Vietnam’s largest textile and apparel corporate group (VINATEX), the group’s apparel exports grew at annual rates of 10-20% during the last two or three years, but apparel exports during January-June 2016 rose by 5-6% year-on-year in volume and value. VINATEX forecasts that the growth is likely to be about the same for the full year.
The Vietnam Textile and Apparel Association (VITAS) also has a similar view. According to a VITAS official, orders are gone. Japanese-affiliated trading firms have also been asked whether their customers have any orders.
One of the factors for the slower growth is a shift of orders to least developed countries such as Cambodia, Myanmar and Bangladesh.

The minimum wages in Vietnam have increased by 15-20% every year for Region 1, which has the highest minimum wages. The wages have more than doubled in five years. The degree of the wage-hikes is greater for Cambodia and Myanmar, but their minimum wages are still about 10-30% lower than Vietnam. Moreover, Cambodia, Myanmar and Bangladesh are easier to utilize because they can enjoy the tariff-free benefits in one-step sewing processes. Such a difference in cost competitiveness is said to be a factor causing the shift of apparel manufacturing orders to these countries.

According to VITAS, 4,400 of the more than 5,000 textile and apparel enterprises in Vietnam are apparel manufacturers. With more than 80% manufacturing apparel, it can be said that the main function is still apparel production.

The increase in Vietnam’s minimum wage in 2017 has been set at 7.3%. Such a small increase is said to be unusual when the increases that well exceeded double digits in the past are taken into consideration. This is also seen as a move that Vietnam, where textiles and apparel are the main export industries, is taking to maintain competitiveness.

In addition to holding down the increase in personnel expenses, it is necessary to establish industries that can completely manufacture textiles and apparel within the country by developing the upstream sector for retaining competitiveness.

Another reason why the upstream sector has to be developed is associated with free trade agreements. As it is well known, Vietnam is participating in the Trans-Pacific Partnership Agreement (TPP), as well as in the Regional Comprehensive Economic Partnership (RCEP). There is also the Europe-Vietnam Free Trade Agreement (EVFTA) with European Union (EU), which is scheduled to come into force in 2018. The country-of-origin rule has 3 processes for TPP and two processes for EVFTA. The markets to which exports are expected to expand in TPP and EVFTA are the U.S. followed by the EU, but unless the materials are procured within Vietnam, export expansions cannot be linked to the agreements, as it would be impossible to share the benefits from tariff-free merits. Especially in the case of TPP, improvements in the foundation of the textile industry create an advantage. By doing so, Vietnam might be able to overtake Thailand and Indonesia which have a textile industry but are not members of TPP.
In anticipation of these agreements going into force, countries that are not participating in TPP, such as China, Taiwan and Korea, are actively making direct investments in Vietnam. A leading Chinese textile company has applied to make investments in a large-scale factory in the southern part of the country. Seven or eight Taiwanese companies that specialize in synthetics have already advanced their operations into Vietnam, and five more companies have plans to make investments by next year.

VITAS projects exports by the country’s textile and apparel industries to reach US$45-50 billion by 2020 (11.5% increase compared to the 2016 target), and a workforce of 3.3 million (up 6%). The plans for the upstream sector are 10,000 tons of spun yarn (up 15%), 700,000 tons of synthetic fibers (up 10%) and 3 billion square meters of fabrics (up 10%). The advancement of foreign-affiliated companies is expected to support these plans, and a major point is how to expand this to the development of local enterprises.

The industrial foundation of fibers, yarns and auxiliary materials is increasingly being established. A number of Japanese-affiliated trading firms consider that Vietnam is becoming capable of producing 20-den. high-density taffeta, and regular-type auxiliary materials can now be procured locally. They have no doubt that the situation will be better in the future. Specific projects in cooperation with Vietnamese manufacturers are increasing. For instance, a project with a Vietnamese textile manufacturer for a certain customer is being embodied, and the line-up of fabrics developed with a local manufacturer for fall/winter 2017-18 has increased. Moreover, there are developments of cut-and-sewn articles with a Korean-affiliated fabric converter. However, many of these projects focus on OEM and ODM product operations for the Japanese market.
In addition to apparel manufacturing, the development of textile production technology is a challenge for the Vietnam textile industry. Increasing connections by catering to such needs is required in the business initiatives of Japanese companies. It is also necessary to draw up plans for expanding overseas earnings with Vietnam at the starting point and the economic partnership agreements as the basis.