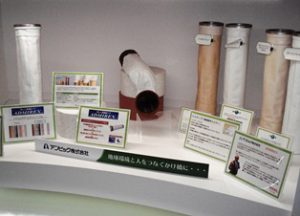 Filter bags are in growing demand for garbage incineration plants

Ambic Co., Ltd. is a manufacturer of felts and nonwovens in the Nikke Group, and celebrated its 100th anniversary last year.

The company started from the manufacture of felts for hat bodies, and today it has extensively expanded its business ranging from felts for musical instruments to nonwovens for industrial materials such as automobiles and filters. It is recently working on newly commencing the production of filter bags in China.

Ambic continues to enjoy strong business and recorded increases in sales and profits in fiscal 2017 (ending in November). Even in fiscal 2018, sales are strong for Himelon, which boasts a diverse lineup including chemical-bonded and needle-punched nonwovens for use as silencing and sound-absorbing materials in automobiles. Felts for musical instruments continue to perform well. Sales of filter-related products have expanded in China.

In China, stricter environmental regulations on smoke from garbage incineration plants are expected to increase demand for dust-collecting filters. Garbage incinerators burn various types of combustibles, so the particles contained in the generated flue gas are also not fixed. Because the garbage is incinerated at a high temperature to prevent the generation of dioxin, the flue gas temperature is also high; therefore, special filter bags are required.

In this field, Ambic put into practical use filter bags made from composite nonwoven fabrics made of polytetrafluoroethylene (PTFE) fibers from an early stage, and has made outstanding achievements at Japanese waste incineration plants. Taking advantage of their achievements, Ambic plans to produced filter bags at its Chinese subsidiary, Jiangyan Ambic Felts & Nonwovens Ltd. Ambic President Kuniaki Hihara says, “Our filter bags are more durable than other products. We will develop the market by promoting the effects from running cost reduction by lessening the frequency of exchanging filter bags.”

Ambic will build a new factory with operation scheduled from 2022. Jiangyan Ambic Felts & Nonwovens will produce the nonwoven fabrics, and a subcontracting factory will make the fabrics into filter bags. The Chinese subsidiary Ambic (Shanghai) Trading Co., Ltd. will sell the fabrics and filter bags. Since sales to garbage incineration plants are basically by bidding, the capital of Ambic (Shanghai) Trading will be increased to pass the bidding conditions. Ambic also has plans to increase the capital of Jiangyan Ambic Felts & Nonwovens for constructing the new factory. In addition, premarketing is to start from the current fiscal year with an aim at first achieving results in operation by bidding with Japanese-made products.

At ANEX 2018, Ambic will show original nonwovens products at the front. In addition to needle-punched nonwovens that can be used for filters and automotive sound-absorbing materials, the company will introduce unique solutions, such as tapes that discharge bleeding water generated in the concrete during tunnel construction as well as residual air.