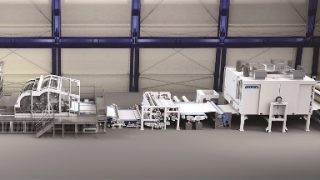 Kanematsu KGK Corp. is a trading firm specializing in industrial machinery and machine tools, and supports the nonwovens industry in Japan as the Japanese distributor for the Andritz Group of Austria.

Kanematsu KGK supplies nonwovens production lines including spunlace systems, and provides various services such as coordinating lines. The company is reputed as “a trading firm that takes good care of its customers”.

Established in 1963 (then Fine Kuroda Services Corp.), its main business line was the sales of machine tools, but from the year 2000 it began handling industrial machinery including textile and nonwovens production lines. In November 2002, the company became the exclusive distributor for the Andritz Group in Japan.

Kanematsu KGK supplies machines and systems from Andritz Perforjet and Andritz Asselin-Thibeau (both located in France) to Japanese nonwovens manufacturers. Since it became the distributor for the Andritz Group, the company has installed more than ten carding machines that have widths of over three meters for high-speed production of lightweight nonwovens inside and outside Japan. It also deals in airlaid production lines from Dan-Web Machinery A/S of Denmark.

In regard to the equipment produced by the Andritz Group, Kanematsu KGK says that the equipment is excellent not only in terms of high speed and stability, but also in regard to maintenance and cleaning, so users can expect an improvement of output. In addition to the superior characteristics of the machines, the company is committed to total engineering, overseeing everything from shipment and unloading to installation and trial operation, as well as supplying air conditioning and dust collecting systems.

In 2017, Kanematsu KGK began the import and sales of fire detectors from a Scandinavian machinery maker. With Smart Factory and IoT (Internet of Things) being the keywords of today, the company is sure that this detector will be required, and is installable on existing lines as well. As far as miscellaneous equipment is concerned, it is also selling corona treatment machines.

Even in the future, sales to Japanese nonwovens makers will continue to be one of its main lines of business, and the company will also offer machinery to Japanese manufacturers that are expanding their business abroad. It will expand its sales based on three key points of the promotion of composites, strengthening proposals for peripheral equipment and the establishment of Smart Business and Operations.