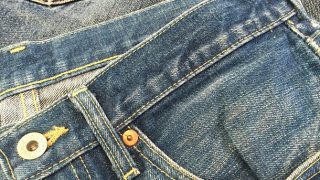 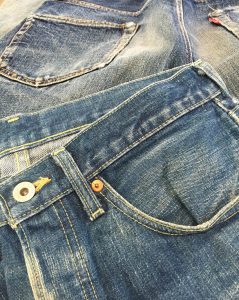 Nisshinbo Textile Inc. is enjoying growing demand for its denim also in overseas markets headed by premium jeans makers on the U.S. West Coast. Thanks to the increasing attention toward its one-of-a-kind technology and weakening of the extremely strong Japanese currency, the company’s denim exports from Japan have been increasing since fiscal 2015, and exports have been maintaining their momentum this year as well. In response to growing demand, the company has increased its export sales staffers. Nisshinbo Textile’s denim business is drawing attention worldwide, and its current activities are introduced as follows.
The denim that Nisshinbo Textile exports to the U.S. is woven on projectile looms inserting two aligned yarns of different yarn counts or fiber variety. Nisshinbo Textile calls it “One Pick Advance”. For instance, a yarn made of polytrimethylene terephthalate (PTT) fiber and a two-layer yarn of which the sheath is cotton and the core is polyurethane are inserted at the same time. A commonly used method is inserting a yarn made by twisting different yarn types together. According to Nisshinbo Textile, the method of inserting two aligned yarns has the characteristics of each yarn coming out more clearly than twisted yarn.
One Pick Advance was developed at the Yoshinogawa Plant (Yoshinogawa, Tokushima Prefecture, Japan), which is the company’s denim mill and the fabric development base for the entire company. In 2014, the company transferred the Research and Development Department and test production equipment at the Miai Plant in Okazaki, Aichi Prefecture to the Yoshinogawa Plant to strengthen the research and development setup at the Yoshinogawa Plant. “Core-Blue”, which has gained a good reputation both at home and abroad, is one of the fruits achieved by strengthening research and development activities. At first glance, the yarn used for Core-Blue appears like an ordinary rope-dyed yarn with an indigo-dyed surface and white remaining core. What is remarkable is that the indigo color of the surface does not fade by washing. When the color fades as distressed processing is performed on parts of the fabrics, the same expression as that at the time of processing is retained even after repeated washings. It was developed by making modifications in the stages of spinning, dyeing and resin treatment. A pure cotton denim that has stretch in both vertical and horizontal directions has also been developed, and Edwin has selected this fabric for its “503” jeans from the fall/winter 2016-17 season. This fabric is a product that combines spinning techniques with liquid ammonia processing technology that the company has accumulated over a period of about 20 years.
The Yoshinogawa Plant has two rope dyeing machines, forty-eight projectile looms, two shuttle looms and a liquid ammonia processing machine exclusively for denim. The monthly production capacity is 500,000 meters. The yarn is supplied from the company’s textile mill at Fujieda, Shizuoka Prefecture, and P.T. Nikawa Textile Industry, an Indonesian textile company of the Nisshinbo Group. Yarns spun at partner mills in Japan are also used.
The denim factory at the Yoshinogawa Plant is already operating at nearly full capacity. Because development requests from foreign and Japanese premium jeans makers are increasing, it is certain that its production capacity will fall behind in the near future. Accordingly, Nisshinbo Textile will make P.T. Malakasari Nisshinbo Denim Industry, its joint-venture denim mill in Indonesia, capable of producing all of the denims that are produced at the Yoshinogawa Plant except for liquid ammonia processed products.