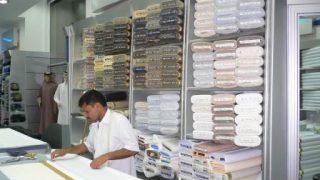 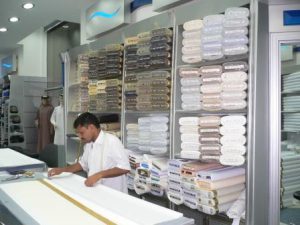 The Ramadan (fasting month) sales season will determine the success or failure of fiscal 2016 exports of fabrics for thobe (an ankle-length Arab garment) to the Middle East, and sales are expected to reach a peak in early July. In fiscal 2015, thobe fabric exports remained buoyant for Japanese companies thanks to the weaker Japanese currency, and this was a factor driving up their business performance. Shipments for this year’s Ramadan sales are already completed, and Japanese companies are waiting for the results of sales at shops and stores. The contracting of fabrics for deliveries after Ramadan is said to be favorable, but there is concern about the outlook of the real economy due to low oil prices and political unrest.
Katsuhiro Iwai, General Manager of the Textile Dept. at Toyobo STC Co., Ltd., which supplies products of the highest quality even among Japanese products, says, “The local economic conditions in the Middle East are recently not good with the impact from low oil prices,” Meanwhile, the General Manager commented that this year’s business continued to be as satisfactory as last year with contracting remaining “too favorable”. Contrary to last year when contracting got off to a good start but got held up in the second half, Iwai says, “This year sales were off to a slow start late but caught up in the second half.”
The company’s sales policy also seems to have a positive effect on business. Last year, Toyobo STC could not completely sell during the sales season. But by selling to limited customers this year, the company succeeded in increasing its say to buyers, and advantageously held sale negotiations despite the unfavorable business condition.
Shikibo Ltd. reigns as the other leader of the top zone. According to Osamu Hirata, Deputy General Manager of Textile Div., Sales Dept. II at Shikibo, business was strong in the previous fiscal year ending in March 2016 with the sales volume increasing by 30% from the first half through the second half. Sales in the current fiscal year continue to be strong maintaining this pace.
In accordance with the start of the second half of fiscal 2015 (from September 2015), Shikibo Konan Ltd., Shikibo’s main processing plant, increased its personnel and capacity for processing fabrics for the Middle East market, and the effects of this reinforcement are already appearing. As of the middle of May, the processing space at Shikibo Konan was fully booked “up to the end of this year”, and the space for outside-ordered factory goods was also filled until summer next year. The company’s pricing policy to maintain the local price without being affected by the fluctuation of exchange rates, has resulted in extending contracts for deliveries well into the future.
Ichimura Sangyo Co., Ltd. exports the largest amount of thobe fabrics from Japan. Manabu Kitazumi, Manager of the Spun Polyester Textile Sect., Textile Dept. 1 at Ichimura Sangyo, says, “Inquiries themselves are enough to fill up to the distant future, but the uncertain economic outlook including oil price trends is making buyers assume a cautious attitude toward contracting goods for deliveries later in the fiscal year.”
Ichimura Sangyo severely predicts that the company’s thobe fabric exports to Saudi Arabia and Dubai, its major export markets, during the current fiscal year might decrease by as much as 30% compared to fiscal 2015. Particularly, exports to Dubai, from which re-exports are large, are likely to encounter the greatest difficulties, due to the stagnant movements of goods caused by political unrest in surrounding areas.
Whether contract orders are made smoothly is to be determined by the situation and movements of store sales. This year’s Ramadan sales are an extremely important point, and will reach their peak in early July when the fasting month comes to an end. The situation of sales was opaque as of the middle of May, as the movement of summer articles was still slow. However, a trade source commented that overall consumer confidence is weak, and wholesalers and retailers had created a momentum to liven up sales before the Ramadan sales season arrive, but the realities are that the ultimate consumers were not following.
The business climate also differed by region. In Dubai and Saudi Arabia where low crude oil prices gave a heavy blow to public finances, the situation is observed to be pessimistic. Meanwhile, natural-gas-producing Qatar is booming despite the low crude oil prices. Beside strengthening sales in neighboring countries, even for Saudi Arabia and Dubai which are said to be relatively strong during an economic downturn, Japanese companies will make utmost efforts to maintain sales of high-class thobe fabrics to regular customers, for which the fluctuation of prices is less. The outcome of such sales will probably be the key determining the success of this year’s sales.