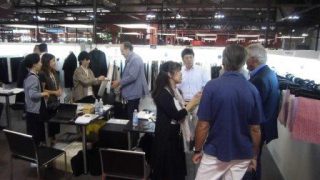 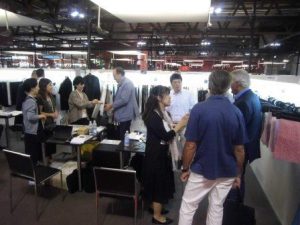 The 23rd Milano Unica for the fall/winter 2017-18 season started on September 6th with business being actively conducted in several booths. It is the first time that Milano Unica is being held at Fiera Milano Rho.

The Japan Observatory has 38 exhibitors. While a sense of stagnation is increasing in the Japanese market, negotiations for developing exports to Europe are active despite the appreciation of the Japanese currency.

With the move to the new venue, the exhibition space is 1.5 times larger. The interior decoration is also of a higher grade, and Milano Unica President Ercole Botto Poala says, “Its contents befit the world’s best textile exhibitions.” Unlike the former independent environment, the Japan Observatory occupies one corner of a large hall facing the Korea Observatory.

Among the thirty-eight Japanese companies and organizations exhibiting in the Japanese Observatory, three are exhibiting for the first time: Design House Kaze Corp.; Mizuho Kogyo Co., Ltd. (a member of the Bishu Wool Collection); and Nishikawa Sangyo Co., Ltd. (a member of the Toray Synthetic Textile Cluster). Buyers and visitors to the Japan Observatory on the first day appeared to be less than usual, but the buyers of well-known brands including Armani and Vivienne Westwood were seen in the Japan Observatory, eagerly looking around for Japanese fabrics.

As for the appreciation of the Japanese currency, a number of Japanese exhibitors note it might cause losses with the time lag, but the majority considers that the impact would be limited, because a great many of the European brands that purchase Japanese-made fabrics do not give top priority to prices from the beginning.