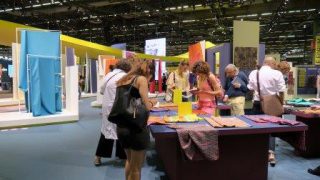 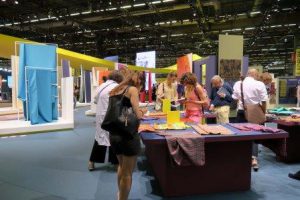 Première Vision Paris for the fall/winter 2017-18 season started with concern about the tense social situation after the terror attacks, but the world’s leading textile exhibition was brighter and full of vigor, as compared with the February holding. The turnout of visitors on the first day appeared to be favorable.

According to Gilles Lasbordes, Managing Director of Première Vision S.A., the French economy is expected to head slightly upward in 2016.
Exhibitors in the six shows that make up Première Vision Paris numbered 1,898 this time, a 1.3% decrease compared to the shows in September 2015. However, the booth area was larger, and this indicated the strong willingness of exhibitors.

Première Vision Fabrics has 789 exhibitors including forty-one Japanese companies. Negotiations on the first day remarkably differed for each and every exhibitor.
The trends of the season were more bold and ambitious, and had two large contrasting approaches that overlap or cross over each other. The first approach fundamentally attaches importance to serenity, and the second is getting merry with a fun and cheerful feeling.