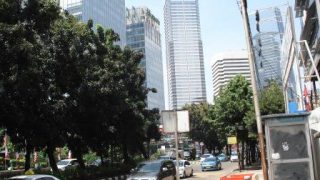 Under such circumstances, the Indonesian government has been aggressively promoting infrastructure investments from the second half of last year, and the economy appears to have bottomed out this year. On a quarterly basis, the real GDP growth in the second quarter (April to June) of this year was 5.18%; therefore, the Asian Development Bank forecasts Indonesia’s GDP growth in 2016 to be 5.2%.

Nevertheless, the future of the economy is still a mixture of optimism and pessimism. For instance, sales of automobiles and motorcycles are sluggish, while inflation is stable on the 3% level. The tax amnesty that started from July imposes low-rate taxes if funds that were evaded such as tax haven were declared within a time limit. Hopes for a reflux of funds are causing stock prices to rise. The rise in stock prices has also increased securities investments from overseas, and the rupiah exchange rates are stable thanks to an improvement in the international balance of payments.

Under such circumstances, the Indonesian textile and apparel industries are also heading toward a recovery. Particularly, the move of apparel manufacturers to Central Java has further accelerated, and this has resulted in a recovery of competitiveness. According to Japanese-affiliated trading firms, the minimum wage comes to about US$140 a month in Cambodia, whereas it is slightly over US$100 in Central Java. The fall of the Indonesian rupiah last year has caused a clear recovery of its international competitiveness.

On the other hand, challenges are great. The yarns and fabrics produced in Indonesia are still poor in variety; therefore, the inflow of Chinese- and Vietnamese-made fabrics continues, which is causing a fall in the unit prices of fabrics.

Indonesia has continued to be the strongest contender among “China Plus One” countries, as integrated production from material to apparel is possible. But in recent years, cases have been increasing in which Indonesia has been losing out to Vietnam, Cambodia and other countries in Indochina. This because the Indochina region has superiority in material procurements, as materials can be easily brought in from China and other supplying countries.
However, there are deep-rooted views that the Indonesian textile and apparel industries have the greatest potentials among Southeast Asian countries, based on their strong industrial foundation and demographics. The key point is how to establish an organic supply chain incorporating yarns, fabrics and apparel production.

Strategies That Take SCM Into View

The business strategies of Japanese-affiliated textile enterprises in Indonesia can be best understood from the standpoint of SCM planning. Textile companies are aiming to expand their sales in Indonesia, and an important point is higher value addition of production and processing items. In the case of commodity items, competition is severe not only among Indonesian products but also with goods from China and Vietnam, and it is certain that Indonesia companies will fall into barren price competition.

Even for trading firms undertaking apparel manufacturing operations, the localization of material production is extremely important. When Chinese- and Vietnamese-made fabrics are used, the risks are great, such as complex customs procedures, poor logistics infrastructure and difficult measures when trouble occurs. If a real integrated production system can be established by also locally producing fabrics, it would be possible for the Indonesian apparel industry to exhibit greater international competitiveness.

Japanese-affiliated textile companies are already making such movements. Instead of production and sales of simple commodity items, supply chain management (SCM) is taken into view with an intention of establishing an apparel manufacturing-linked business model that can be proposed directly to apparel firms. Even for apparel manufacturing, moves are increasing to use local materials among specialty stores of private label apparel (SPAs).