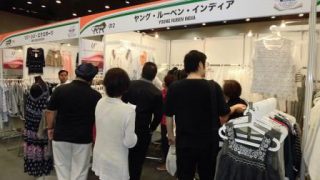 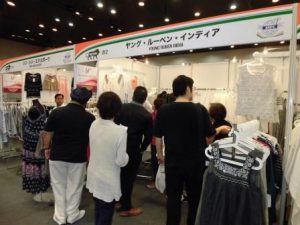 The recent India Trend Fair 2016 (ITF) trade show remarkably exhibited India’s potentials as a global production base and as a huge market.

Under the special sponsorship of the Ministry of Textiles and Government of India, approximately eighty leading companies that are actively conducting business in the U.S., European and Japanese markets exhibited apparel, home textiles, fabrics and accessories, which were designed with Japanese trends taken into consideration.

Gus Clothing Company, a knitwear manufacturer exhibiting for the first time, introduced its collection for spring/summer 2017, such as T-shirts. According to a company official, OEM negotiations were favorable for expanding exports to the Japanese market.

Rug manufacturer Riviera Home Furnishings Pvt. Ltd. presented designs that were made with a Japanese designer, and its made-to-order system that can accept various items in small lots was well received. According to a company official, new buyers were fewer than expected, but the negotiations went into finer detail.

Tara Blanca, a Japanese brand that has collaboration with a long-established shawl factory in Kashmir, was also at ITF 2016. Especially popular were original stoles for which planning was entirely made in Japan and which traditional Kashmir weaving and embroidery techniques were arranged in contemporary styles. Sales have already reached high levels at wholly-owned outlets, shops in major department stores and at events, and its wholesale business toward apparel firms and specialty stores also gained momentum thanks to participating in ITF 2016.