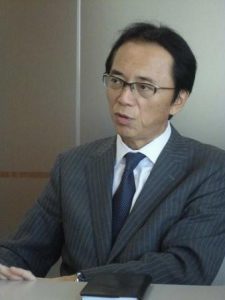 Tetsuo Ikeda, President of Komatsu Seiren Co., Ltd., emphasizes the need for developing non-apparel application sectors and global business by making full use of its original and highly advanced processing technologies, as it is considered that a shrinkage of the domestic market is inevitable.

From a medium-to-long term standpoint, Komatsu Seiren aims to expand into new areas such as seismic reinforcement, and will endeavor to increase global sales. As for measures for improving gradually decreasing exports to China, the company will start exhibiting in Intertextile Shanghai again, and will strengthen cooperation with Komatsu Seiren (Suzhou) Textile Dyeing Co., Ltd. In addition, it will place an emphasis on developing the general merchandise sector in Europe in response to its successful participation in Première Vision Leather, in which it exhibited for the first time this September.

Business during the fiscal first half (April-September 2016) moved generally according to its plans. In the current fiscal year, the company is endeavoring to increase productivity by 10% compared to the previous fiscal year, while reducing the number of working days by 10%. An improvement of 3-4% was achieved during the fiscal first half, and productivity is to be further improved in the second half.