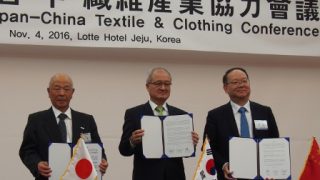 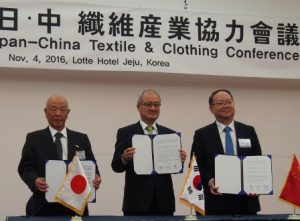 At the recent 6th Korea-Japan-China Textile & Clothing Conference held in Jeju, Korea, the three countries have basically agreed to use the one-step process as the country-of-origin rule for textile goods in the Free Trade Agreement (FTA).

Agreements were also made on issues regarding the environment, safety and fashion-related cooperation projects at the conference.

Akikazu Shimomura, President of the Japan Textile Federation, says, “The sixth conference completes the second round of holding the conference in China, Japan and Korea. We have achieved a better and closer recognition with each holding, and the sixth conference has been the most successful.”

In the future, Expert Committees will discuss the rules for specific items, and urged their governments to adopt the rule.

The next conference will be held in the fall of 2017 in Japan, and the practice committee for making preparations will get together in China next April.