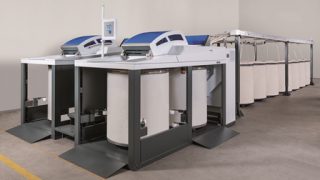 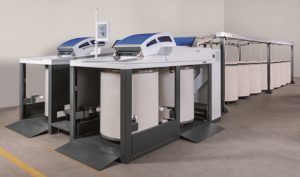 Trützschler GmbH & Co. KG has introduced its new Breaker Draw Frame TD 9T, which is called TWIN Draw Frame.
TWIN means a draw frame with two deliveries, but not based on the traditional double head principle. The advantage of low space requirement has been maintained. However, the disadvantage of double head draw frames, poor efficiency, has been eliminated.

The TWIN draw frame TD 9T has two independent production sides. If a standstill occurs on one side, the other side continues producing. This also applies to the can changer. When one can is full, it is changed. There is no need to wait until the other can is full as well. There is no coupling efficiency between the two sides.

With this concept, it is even possible to produce different qualities on both sides. In a small air-jet spinning mill, the TD 9T operates on one side as blending draw frame and on the other side as second passage.

The TWIN draw frame has been designed for the application of Jumbo Cans with 1,200 mm diameter. This applies to can set-up in the creel and at the delivery side. These cans hold 43% more sliver than conventional 1,000 mm cans, which means less sliver piecing and significantly less can transports.

Both draw frame sides are operated from a platform that is located in the middle. This saves space and reduces the walking distances for operators. The color touch screen makes operation simple and effective.