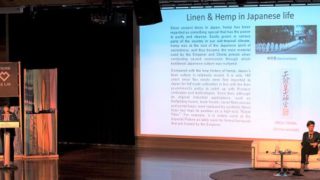 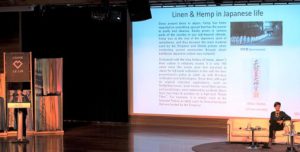 According to the Japan Linen, Ramie and Jute Spinners’ Association, hopes for the Japanese market were high at the 3rd International CELC Congress held in Madrid, Spain in October.

The report by the organizer, The European Confederation of Linen and Hemp (CELC) drew the most attention, and requests for data and information were received from numerous countries.

Even in 2015 Material Balance that followed global trends from bast fibers to spinning, weaving and manufacturing of products, Japan was the only market with two arrows pointing upward. The arrow was one for Europe, China and India. The U.S. market had a mark indicating no major fluctuations.

It was indicated that after the 2nd International CELC Congress held two years ago, the bast fiber business turned downward with the import volume (consumption) of wet spun yarn decreasing for several countries including Japan and slower growths posted thereafter. A number of reports from participating countries sought re-growth by strengthening cooperation among countries.

Under such circumstances, the report compiled by JLRJSA attracted attention, as it gave in detail the scale of the Japanese textile market based on the country’s economic indicators, linen trends, characteristics of the Japanese linen market, sustainable growth of linen business and exhibition in Milano Unica.

Particularly interesting was how endeavors were made to achieve further growth in the areas of apparel, home textiles and interior decoration, utilizing the strengths of the Japanese market such as (1) the hot and humid climate, (2) the tradition of wearing vegetable fibers, and (3) the superiority of luxury fabrics and fashions.