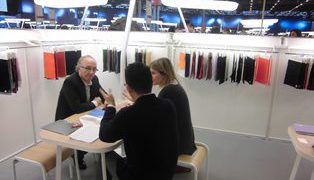 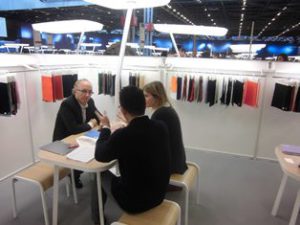 In Première Vision Fabrics, forty-seven Japanese companies are exhibiting, including two for the first time. The turnout of visitors appeared to be slow right after the exhibition started, but it soon returned to the usual active business scene in the afternoon.

One of the two companies that is participating for the first time is looking for brands that continuously place orders even in small lots every year, and hopes that its participation will have an effect on Japanese high-end apparel brands, which are one of its major business channels.

The second company that is exhibiting for the first time intends to establish sales channels on a worldwide scale, and has been focusing on expanding exports before its participation in the exhibition.

An exhibitor that manufactures warp knitted fabrics has a total of 14 fabrics on display in the various forums including 5 in the main forum. This is a record number for the company, and is considered one of the largest numbers among Japanese companies.

Another Japanese exhibitor that is participating for the sixth time has been targeting maison fashion houses. Its fabrics on display in the main forum have become very popular.