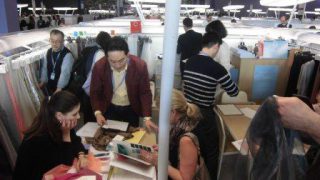 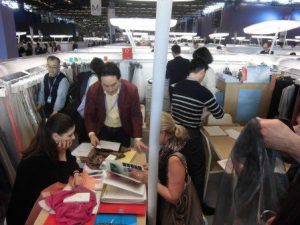 According to a number of Japanese exhibitors at the recent Première Vision Fabrics for spring/summer 2018, the number of visiting buyers appeared to have been smaller than usual. However, many of the exhibitors emphasized that the response was good. As confirmed at Milano Unica that was held one week earlier, the move from quantity to quality is becoming more prominent even at European textile fairs. Furthermore, the key to export expansion is said to be a shorter lead time.

Suncorona Oda Co., Ltd. exhibited in Première Vision Fabrics for the third time; visiting companies numbered about 100 the first time it exhibited and increased to about 150 the second time and was nearly 200 this time. The company was so busy that it could not attend to all of the buyers, but has increased its confidence in expanding sales.
Shibaya Co., Ltd. exhibited for the second time, and business was a great success with more than 200 companies visiting its booth. The company also had nearly 200 companies visiting its booth when it exhibited for the first time. Because of the good response this time, Shibaya has decided to continue its participation.

Lily Lace International Co., Ltd. exhibited for the first time, and visiting companies numbered around 200. The company had a total of fourteen fabric items exhibited in the Forum, including six in the Main Forum, and the fact that it had one of the largest number of items on display in the Forums even among all the exhibitors seemed to have had a favorable effect on attracting buyers to its booth.
Chikuma & Co., Ltd. reported that visitors to its booth were the usual number. However, the brands that the company has been targeting visited its booth, and the company was able to hold high-quality negotiations.

Japanese exhibitors noted that the challenges for expanding exports were strengthening human resources and improving merchandising and development capabilities. An issue that most exhibitors have to deal with is the lead time. Even in Europe, the demand for speed has rapidly increased in recent years, such as immediate delivery of a few meters of fabrics for producing a garment sample. A Japanese exhibitor said that business would be difficult unless fabrics are kept in stock.