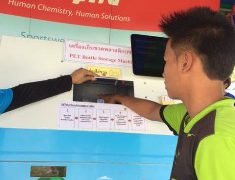 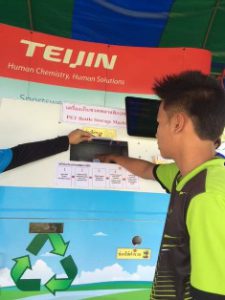 The Assumption College Primary Section (ACP), the campus of Assumption College that is a private school for grades 1 to 12 in Bangkok, Thailand, and Teijin Polyester (Thailand) Limited (TPL), a Teijin Group subsidiary in Bangkok that manufactures and sells polyester fiber, announced their collaboration for recycling used PET bottles from April 1st.

Two reverse vending machines that collect used PET bottles and pay the user a fee, will be installed at the ACP campus, and the school will encourage teachers, faculty, employees, students and visitors to use these machines. TPL will collect used PET bottles from the machines and recycle them into polyester fiber, which it will use to produce T-shirts. The T-shirts will be provided to youths who participate in football clinics organized by ACP and the Japan Dream Football Association (JDFA), an organization that supports the nurture and development of young football players in Southeast Asia.

ACP is one of several campuses operated by Assumption College, which has been providing high-quality education in Thailand for more than 130 years. The school expects to heighten students’ environmental awareness through this fun and educational collaboration with TPL.

The Teijin Group is steadily expanding their business in Thailand, which has become a key hub in global production operations. The collaboration with ACP is expected to make people more aware of Teijin’s environmental initiatives as well as recognizing the Teijin brand in Thailand.

ACP and JDFA have been jointly organizing football clinics for children at the ACP campus based on an agreement reached last year. TPL, which has sponsored JDFA since 2012, recycles PET bottles that it collects at the football clinics.

ACP and TPL decided to collaborate in their recycling initiative to encourage environmental education and to pursue mutual interest in developing young people through football. Both parties plan to highlight their activities as a part of their upcoming 50th anniversaries.