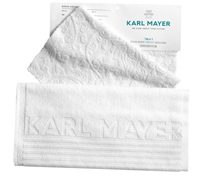 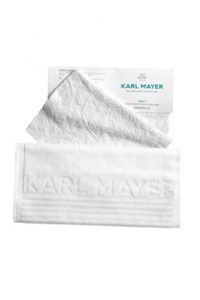 The TMJ 4/1-T terry warp knitting machine with a jacquard bar from Karl Mayer is bringing a touch of pizzazz to towels.

The terry business continues to be a focus of innovation at Karl Mayer. Following the revamp of the TM 4 TS terry warp knitting machine for processing staple-fiber yarns and its technical upgrade, together with various new textile developments, the company is now launching a new machine that can produce an even greater range of patterns.

The designation of the new TMJ 4/1-T alone shows that it is something quite unique. This terry warp knitting machine for processing filament yarns is the first of its kind with a jacquard bar included in the set of knitting elements, so that even lettering can be worked into towels, bathrobes and facecloths.

The jacquard bar on the TMJ 4/1-T enables new designs to be produced that have not been possible until now. Logos, lettering and floral effects can be worked, as well as geometric patterns and sweeping, decorative effects. Despite their fluffy surface structure, the pattern elements are extremely clear, and are worked and placed much more easily and flexibly than on the standard machine on one side of the fabric. The design is worked exclusively by the jacquard bar, while the ground lappings and main machine settings remain constant. The simple design of the knitting element produces loop-free, smooth areas on an otherwise three-dimensional fabric construction. The associated brushing unit produces a perfect, voluminous, fluffy surface. As the fabric passes this unit, the loops, which were formed by GB 1, are made more prominent and the underlaps on the other side of the fabric are raised up.

The technology of the TMJ 4/1-T is based on the standard machine, the TM 4-T, and thus delivers the same high level of performance. For example, this new tricot machine operates at a maximum speed of 1,200 min-1. It is very easy to operate and produces high-quality products. During the course of the modification work, the jacquard bar has taken on the position of ground guide bar GB 4 on the original version to increase the range of patterns that can be worked. Certain new features have also been incorporated. For example, the control box with the oil cooling system forms a compact unit, which takes up less space, and the color and warp beam frame meet the new corporate design specifications of the company group.

An affordable patterning system developed by EAT is available for carrying out patterning efficiently, and has been adapted to suit the specific requirements of the TMJ 4/1-T.