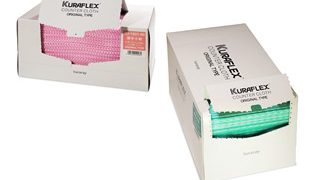 Kuraray Kuraflex Co., Ltd. offers nonwovens made by various manufacturing methods such as spunlace, meltblow and original steam-jet technique, and plays the center role in the Living Goods and Materials Division of Kuraray Fibers and Textile Company. An emphasis is also placed on offering nonwovens made from Kuraray’s original special polymers. Atsumi Adachi, President and Representative Director of Kuraray Kuraflex aims at making it a nonwovens business that demonstrates originality. An item that continues to do well in recent years is kitchen wipes. Cases are increasing in which the company’s products are introduced in sanitation management manuals, such as in the restaurant service industry, and initiatives with a specialized trading

END_OF_DOCUMENT_TOKEN_TO_BE_REPLACED

According to EDANA’s recently disclosed annual nonwovens industry survey, 2017 nonwovens production in Greater Europe increased by 4.3% in volume to 2,544,450 tons with a total estimated turnover of around 7,869 million euro (up 5.6%). The total European Union output is now close to 2 million tons. Jacques Prigneaux, EDANA’s Market Analysis and Economic Affairs Director, elaborated, “We continue to see the expected variances within the EU region. Although some established players such as France and Benelux countries were at a standstill, many pushed on from last year with Greece, Romania, the Czech Republic, Slovenia, U.K. and Ireland all witnessing growth. In Greater Europe as a whole, the standout performers

END_OF_DOCUMENT_TOKEN_TO_BE_REPLACED

Held every four years since 1951, ITMA has reinforced its reputation as the world’s leading textile and garment technology exhibition. Exhibition space for its 18th showcase to be held in Barcelona has been fully booked by the application deadline of April 6th, 2018. According to CEMATEX, the European Committee of Textile Machinery Manufacturers (the owner of ITMA), over 1,500 companies from 45 countries have applied to take part in ITMA 2019. The space booked already totals more than 110,000 square meters net. As applications continue to stream in, plans are underway to expand the exhibition to the entire Barcelona Gran Via venue. CEMATEX President Fritz P. Mayer says, “We