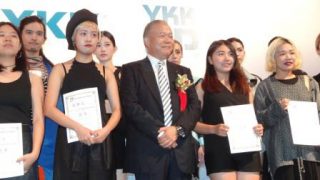 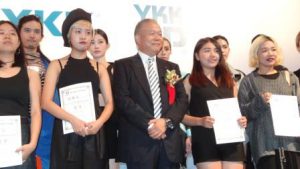 Tadahiro Yoshida, Chairman and CEO of YKK Corporation, expressed his intention of closing the Chungli First Factory in the fastening business of YKK Taiwan Co., Ltd. and constructing a new third factory at a party celebrating the 50th anniversary of YKK Taiwan in Taipei. Construction of the third factory is to be included in the 5th medium-term management plan starting from 2017.

YKK Taiwan was founded in March 1966, and the Chungli First Factory went into operation in June of the same year with sales of coil zippers starting from July. YKK started overseas expansion in the 1950s, and is currently active in 71 countries and regions. YKK Taiwan is its eighth overseas base, and the second oldest base in Asia.

Gradually expanding its product range, the Chungli Second Factory was completed in 1987 as Taiwan expanded her exports to the U.S. The factory’s capacity was increased, and business was expanded to architectural products. In 2003, an R&D center was set up to cater to customer needs; YKK has only five R&D centers around the world. Its sales in the current fiscal year are expected to be about NT$10 billion.

Chairman Yoshida says, “The environment surrounding the fastening business is constantly changing with free trade being established in several regions, the relocation of apparel manufacturing operations, the shorter cycle of products, etc. Under such circumstances, YKK Taiwan has grown by catering to high-function and high-fashion needs mainly in the sportswear sector. Even in the future, R&D functions will be increased to supply products that have higher functionality and are highly design oriented in a timely manner.”