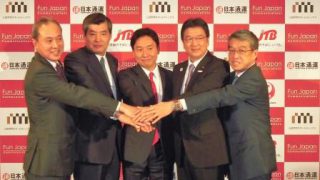 Capitalized at 10 billion yen, the capital shares are 50% for JTB, 40% for Nippon Express and 10% for Isetan Mitsukoshi Holdings. Daisuke Fujii from JTB serves as president and CEO.

Japan Airlines Co., Ltd. will enter a business alliance with FJC with an aim at strengthening services in Asia.
FJC will operate Fan Japan, a website that was originally run by Nippon Express for introducing Japan and most used in Asia, and will promote the sales of Japanese-made goods, businesses and services, inbound demand, the overseas business operations of Japanese companies, and revitalization of local economies.

Fan Japan is currently active in Indonesia, Thailand, Malaysia and Taiwan, making full use of its original consumer database. In the next fiscal year, activities are to be expanded to the Philippines and Vietnam.

FJC will first focus on the remarkably growing middle income group in Asia (excluding China), and in the future it will play the role of a cross-border EC website with an intention of expanding into the European and U.S. markets.