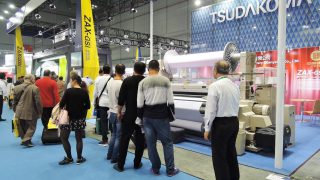 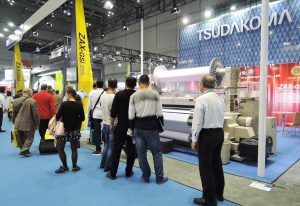 Featuring the largest showcase in the series since its launch in 2008, ITMA ASIA+CITME 2016 received a very strong response from visitors.The exhibition area of 170,000 square meters was 12% larger than the previous exhibition in 2014, and the number of exhibitors increased by 7% to 1,673 from 27 countries and regions, the largest ever.
By the end of the five-day show on October 25th, the fifth combined showcase registered visitors of over 100,000 from 102 countries and regions, 20% of whom came from outside China.

CEMATEX President Fritz Mayer says, “We are delighted that this was our largest show since its launch back in 2008. The majority of our visitors were serious buyers, and as a result our exhibitors are very happy with the overall quality. We are looking forward to another successful presentation of the next combined show in 2018.”

Wang Shutian, President of the China Textile Machinery Association, agreed, saying, “The combined show continues to be a ‘must’ for textile machinery manufacturers and their customers, and we are delighted to present the very best technologies from both east and west to Chinese and other Asian buyers.”

With the rapid development of information technology, the organizer provided some brand new services to visitors. Visitors could download an interactive map to navigate the exhibition halls, and visitors were also given the option of registering and paying for their badges via WeChat, a popular mobile app in China.

ITMA ASIA+CITME 2016 had approximately 40 exhibitors from Japan, which was the third largest among foreign participants after Germany and Italy. Japanese exhibitors promoted energy saving, etc. through their presentation of the latest models and solutions.

Tsudakoma Corp participated together with its two Chinese affiliates, and exhibited three of the latest air-jet looms and two water-jet looms. Bringing looms weaving a curtain fabric and toweling to the forefront, the company made an appealing demonstration of energy saving and high speed. The focus on non-apparel applications created a freshness aimed to stimulate visitors’ willingness to place orders.

Toyota Industries Corporation showed its synergy from spinning to weaving by exhibiting a ring spinning frame, four air-jet looms including a new model with enhanced versatility thanks to a unique shedding motion, and a new water-jet loom that boasts high weaving speed and low vibration. The new air-jet model demonstrated its potentials to weave a highly fashionable complicated gingham pattern and corduroy with yarns of different varieties and counts. 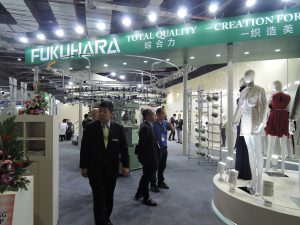 Being conscious of the shift of production from China to Southeast Asia and other regions, Fukuhara Industrial & Trading Co., Ltd. promoted its synergy to cater to needs throughout the Asian region. An eye-catching exhibit was the M-FY4QG double knit quarter gauge machine with a four-color auto-striper, which features higher production efficiency and wider fabric knitting range. The M-FY4QG can knit yarns of different materials and thicknesses separately on the front and back sides of the fabric, enabling the creation of products that are highly fashionable, have a better feel and greater windbreaking performance. It is a model with special specifications including dial in 28 gauge and cylinder in 7 gauge.

ITMA ASIA+CITME 2016 exhibitors actively held negotiations. With increasing needs for labor saving and the production of higher value-added products, it can be said that business opportunities have increased. 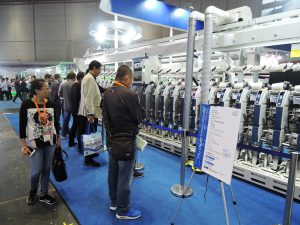 Murata Machinery, Ltd. received many inquiries for its Vortex spinning machine. As the three processes of roving, spinning and winding are performed on one machine, omission of processes is seen as an attractive feature for reducing labor costs. As the Vortex can spin sophisticated functional yarns, its sales have been rapidly growing in China in recent years.

TMT Machinery, Inc. had a booth jointly with Murata Machinery, and presented mainly yarn processing machines for differentiation, such as a high-speed texturing machine. Chinese synthetic fiber producers are endeavoring to survive the excessive competition by differentiating themselves with advanced yarn processing technology. Under such circumstances, TMT Machinery’s sales in China are showing a recovery this year after the decline in 2015. In addition to apparel applications, the company is placing an emphasis on texturing machines targeting industrial applications where value addition is in greater demand, such as safety, security and ecology. 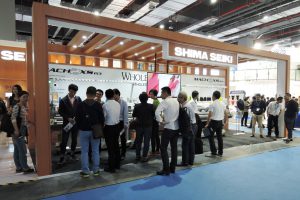 Shima Seiki presented the next step in conventional flat knitting with the latest offerings in shaped knitting technology. The SRY183LP was shown with a 72-inch/180cm-wide needle bed for supporting garment-length production and an available maximum of 30 intarsia carriers for full intarsia patterning capability, in ultrafine 16 gauge.

The brand new SVR123SP features a single loop presser bed located above the rear needle bed. Making its debut at ITMA Asia in fine 14 gauge, this model is capable of a wide range of knitting from fashion to technical textiles. Based on the industry-benchmark SVR-series, its triple knitting system is capable of highly productive knitting of complex structures such as inlay.

At ITMA ASIA+CITME 2016, a number of inkjet textile printers were on exhibit and drew considerable attention.
Konica Minolta, Inc. exhibited the Nassenger 10 high-speed direct-to-textile inkjet printer and Nassenger 8 medium-speed inkjet printer, and introduced the SP-1 ultra-high-speed single-pass printer using display panels. During the exhibition, a business alliance with Toshin Kogyo Co., Ltd. for sales of the SP-1 on Mainland China was announced.

Mimaki Engineering Co., Ltd. promoted the Tiger-1800B high-speed direct-to-textile inkjet printer of La Meccanica of Italy, which recently became a member of the Mimaki Engineering Group. The response to this high-speed printer was great, and inquiries were received from approximately twenty firms. 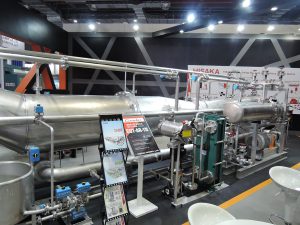 Although the Chinese dyeing industry is having difficulties due to environmental regulations and a reduction of orders, Hisaka’s sales in China are growing this year. In addition to the strength of its products, the company’s ability to make proposals including pre- and subsequent processes has been appreciated, and the business of “winners” including synthetic fiber producers is growing smoothly.

Manufacturers of parts and components held active negotiations. Kasen Nozzle Mfg. Co. Ltd. promoted mainly differentiated products such as conjugate spinnerets. Its sales in the Chinese domestic market sharply increased last year thanks to a boom in island-in-the-sea fibers, but sales are at a lower level this year. However, sales remain firm centering on differentiated products. Particularly, spinnerets for synthetic fibers for nonwoven fabrics are growing at a stable rate.

Takayama Reed Co., Ltd. received many inquiries for high-quality reeds, as well as for maintenance equipment such as reed cleaners. Nankai Industrial Co., Ltd. aimed to enhance the recognition of its heald frames, and its healds are in growing demand thanks to the movement toward using high value-added healds.

Kanai Juyo Kogyo Co., Ltd. promoted mainly travellers in response to high-speed cotton spinning operations. Although the outlook for the Chinese market is not optimistic, business opportunities are increasing as spinners are moving toward differentiation.

Karl Mayer already rated its participation in ITMA ASIA+CITME 2016 a success halfway through the exhibition. During the few days of the exhibition, the world’s leading supplier of warp knitting machines, warp preparation machines and systems for producing technical textiles welcomed nearly 350 visitors having specific interests, along with many people who were just curious.

The majority of the visitors were from the domestic market, and showed particular interest in the tricot machines on show – a fourth generation HKS 3-M, which features impressive flexibility, speed and user-friendliness, and an HKS4-M EL, which also offers high speed and patterning potentials. Manufacturers of technical textiles were delighted with the new ideas on the subject of lightweight constructions. Karl Mayer also exhibited a highly productive sectional warping machine and an innovative sizing system.

Coinciding with the exhibition, an in-house show was held at Karl Mayer (China) in Wujin, Changzhou, which showcased an extensive range of products. The in-house show focused on the production of lace, and the newly developed OJ 59/1B sets new standards for multibar jacquard machines in terms of cost-benefit ratio. Karl Mayer also showed a new double-bar raschel machine for producing fashionable shoe designs and a direct warping machine for warp knitting preparation, which features universal hybrid operation. The in-house show attracted nearly 200 registered visitors on the first two days.

SSM launched nine new products, and was pleased with the great interest in the new X-Series. X-Series machines (TWX-W/D, PWX-W and PSX-W/D) are the most economized winding solution, reduced to the max yet maintaining highest flexibility for any cost efficient winding application. From SSM GIUDICI came the DP5-T which was exhibited in a special single-execution showing Fancyflex for the production of slubs and thick & thin effect yarns. The SSM DURO-TD precision assembly winder for coarse technical yarns up to 50,000 dtex offers a new level of flexibility and package quality in one machine; thereby ensuring optimal unwinding and running performance in all twisting processes.

Groz-Beckert held technical discussions with more than 4,000 visitors during the five days of the exhibition. Most of the visitors to the Groz-Beckert booth were from Asia. Using exhibits and films, the company showed how smart products and services can save resources, while at the same time increasing productivity. To present the products, realistic transparent textile machines were used for the segments of knitting, weaving, felting, tufting, carding and sewing.

The Rotorcraft booth was one of the main attractions of the show, as the company presented a revolutionary new ring spinning frame. Named Next Generation Spinning (NGS), this frame meets all the requirements of a 21st century mill. In order to avoid any operating errors that are common with ring frames today, the NGS frame has no setting screws whatsoever.

The next combined show will be held at the National Exhibition and Convention Centre (Shanghai) from October 26th to 30th, 2018, and will be organized by BJITME and co-organized by ITMA Services.