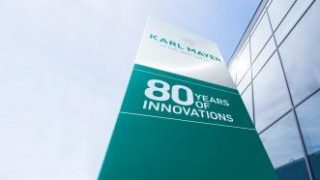 Karl Mayer is celebrating its 80th anniversary this year.
Karl Mayer CEO Arno Gärtner says, “We will organize various in-house shows for our business partners, giving them an insight into the future of textile development and production technology. Almost two years after the last ITMA, we will show our next innovation steps – responding to the challenges of digitization and conservation of resources.”

In various locations, Karl Mayer will present new textile developments covering trends such as athleisure, and will show the introduction of digitization into the textile industry value-chain by expanding the application of its new automation platform Kamcos 2.

Sustainability is another important topic for the future. Karl Mayer will present solutions with LEO (Low Energy Option) and Prosize, a sizing system that will save up to 20% resources in freshwater, sizing agents and wastewater.
During the last two years, Karl Mayer has invested approximately 40 million euro in several locations worldwide:
New production facilities at Karl Mayer Rotal in Italy
A new Development Center for double-bar raschel technology at Nippon Mayer in Fukui, Japan. It will be opened officially with an in-house show from March 1st to 3rd.

At the Karl Mayer Headquarters in Germany, visitors will be able to see this July a new 12,000-square-meter assembly hall and a new Core Competence Center for Parts and Components. The company will then set up nine newly developed machines for an in-house exhibition organized for business partners, plus a separate open day for the public.
Furthermore, Karl Mayer (China) will show new developments to business partners this autumn at its factory in Changzhou, China.