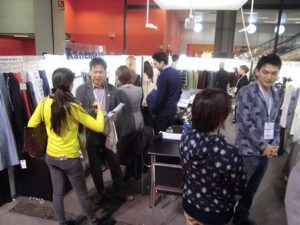 At the recent Milano Unica for the spring/summer 2018 season, a number of exhibitors in The Japan Observatory (JOB) reported that buyers increased only sparingly with one exhibitor saying that the requests for swatches were about half as usual. However, another exhibitor noted that all of the usual customers showed up.

Although there was a difference in visitors among the booths, a number of the exhibitors were able to almost conclude contracts on the spot. The continuation of exhibiting and making proposals has enabled Japanese exhibitors to make sound and steady progress in terms of business.

Although the final results have not been disclosed yet, The Japan Fashion Week Organization (JFW), one of the organizers of JOB, notes qualitative changes in Milano Unica itself and the position and stance of JOB since the exhibition moved to a new venue from the previous holding. Buyers are being strictly screened for the purpose of carefully selecting excellent buyers, and there is no doubt that it had an influence on visitors to JOB last time and this time.

The position of JOB in Milano Unica has also changed. The first four JOBs had many buyers who visited the JOB just to see Japanese-made textiles because of their rarity. However, buyers have come to know the characteristics of each booth by making repeated visits, and buyers who are just stopping by seem to have decreased. Some JOB exhibitors mentioned that buyers who repeatedly come and place orders steadily showed up this time, and the time buyers stayed in JOB became shorter. It is said that buyers who are seriously searching for Japanese-made textiles have become established, while buyers who are just looking and merely asking prices have decreased.

It also appeared that the decrease in Chinese buyers had an impact in general, as Milano Unica overlapped with the Chinese New Year.