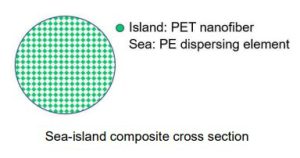 Teijin Frontier Co., Ltd., the Teijin Group’s fibers and products converting company, announced today that it has developed an eco-friendly staple polyester nanofiber that offers excellent performance to reinforce rubber uses in products including automotive tires, hoses and belts. Teijin Frontier will start production in 2023 and expects sales to reach JPY one billion (nearly USD 8.2 million) by the fiscal year ending in March 2028.

Teijin Frontier, guided by its THINK ECO environmental initiative, is striving to improve its environmental value, including by developing greener materials and products for applications ranging from clothing to industrial materials. The new staple nanofiber matches the company’s increasing emphasis on solutions that help to ease environmental burdens.

Teijin Frontier will continue to expand the types of polymers that can be used for the new staple nanofibers and continue to develop them for a wide range of rubber and resin products such as tires, hoses and belts. The company will also promote the development of products that utilize recycled raw materials with the aim of reducing the environmental burden.

The new staple nanofiber incorporates both polyester nanofiber and polyethylene polymers, which are combined in Teijin Frontier’s proprietary sea-island composite cross section. Different polymers are used for the “sea” and “island” parts to improve rubber reinforcement. A polyester nanofiber with a diameter of either 400nm or 700nm is used as the island as reinforcing material and the surrounding sea part is made with polyethylene, which mixes easily with rubber. Compared to conventional products, mixing takes place at the molecular level, which enables thousands of times more nanofibers to be evenly dispersed in the rubber for equal or better reinforcing but requiring a relatively small amount.

The length of the new staple nanofiber is just 1mm or less, but the aspect (length-to-diameter) ratio is high thanks to the small diameter, which contributes to reinforcing. Further, the fiber’s short length prevents entanglement and twisting, and additionally helps to disperse the fibers and rubber evenly. The fiber forms continuous lines or surfaces, rather than dispersed clumps. In actual use, the fibers rather than the rubber absorb deformation stress, resulting in more durable rubber products.

Since the new staple nanofiber exhibits higher reinforcing performance compared to conventional products, it can reduce the polymerization process. The shorter fiber eliminates the need for surface treatment, which prevents the fiber from intertwisting like cotton. Both attributes help to reduce environmental load, including less greenhouse gas emissions.

When used in automotive tires, the new staple nanofiber increases elasticity and reduces resistance, so it should help to improve fuel efficiency and reduce noise. It is also expected to improve the elastic modulus and durability of automotive hoses and belts, which has been difficult to achieve until now.

Staple fibers are used to strengthen rubber in products required to withstand repeated deformation and abrasion. Conventionally, this has been achieved by adjusting fiber strength and length, the latter generally to between several millimeters and several tens of millimeters. Increased length, however, leads to entanglement and twisting when the fiber is kneaded into the rubber, which reduces strength due to less efficient fiber dispersal. Meanwhile, growing environmental concerns are raising demands for reduced molecular weights and surface treatments to reduce greenhouse gas emissions.