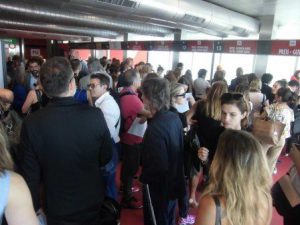 At the end of the second day of Milano Unica, a number of Japanese exhibitors noted that buyers and visitors were less than the previous exhibition, but the business negotiations were rich in contents.

According to Furuhashi Weaving Co., Ltd., which has exhibited for five consecutive times since Japanese companies were allowed to exhibit, buyers and visitors as of the end of the second day were about half compared to the February exhibition, but the contents were extremely satisfactory, as repeat customers were numerous and major Maison fashion houses showed up.

Saiei Orimono Co., Ltd. also indicates that buyers and visitors decreased to half. However, two-thirds of them were repeat customers, so the company expects that contracts are likely to be made. This time, the company is exhibiting salt shrinkage-processed types of the world’s finest and lightest silk fabrics and pure silk parachute cloths that are popular in Japan.

The Yamanashi Textile Association also mentioned that negotiations on the first day numbered 25 cases, as compared with 50 on the first day of the February show, but the contents were not poor and were very good on the second day.